Previous in situ TEM allowed analysis of dislocation emission in 3-pt. bending of 100 nm thick stainless steel. Toughness was greater than expected from shielding. An improved design for tests on silicon single crystals will be discussed.  A portion of the measured stress intensity in the stainless by in situ dislocation imaging and in 1 µm silicon addresses the increase in measured fracture toughness.  Here, Si yield strengths ranged from 4.5 GPa down to 1.2 GPa from 300K up to 873K.  The brittleness temperature for bulk mm beams of 972K dropped to less than 723K for 1 micron thick silicon. An attempt at a Brittle Transition Model may be forthcoming if Spring Break cooperates.

As a graduate student (Berkeley) and Professor (Minnesota), he pioneered fracture studies of TRIP steels, which eventually became lower alloy, integral members of automobiles for crash resistance. At Minnesota University, some 56 PhD students have been mentored producing 500 refereed publications. This encompasses five fields of basic research including fracture mechanics of alloys to nanoindentation of thin films of metals, ceramics and semiconductors. More recently he has emphasized length scale effects in nanoparticle, nanopillar and thin-film fracture mechanics investigations using in situ probes inside electron microscopes. Numerous honors and awards include being on the Acta Metallurgica Board of Directors and Chair (1983-1989),  the Board of Governors of the NSF Institiute for Mechanics and Materials and Chair, UCSD (1992-1995), the Res Mechanica Chair (2002) at KU Leuven, Belgium (2002) and the G.E. Distinguished Lecture Series at RPI, (October 2006). He is Fellow of ASM, TMS and MRS and was awarded the Outstanding Paper Award for Acta Metallurgica et Materialia (1994). Recently he was in residence at ETH Zurich as Visiting Professor, Fall 2013. 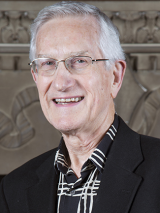