The intermittency of wind and solar power puts strain on electric grids, often forcing carbon-based and nuclear sources of energy to operate in a load-follow mode.  Operating nuclear reactors in a load-follow fashion is undesirable due to the associated thermal and mechanical stresses placed on the fuel and other reactor components.  Various methods of Thermal Energy Storage (TES) can be coupled to nuclear (or renewable) power sources to help absorb grid instabilities caused by daily electric demand changes and renewable intermittency.  This is known as a Nuclear Hybrid Energy System (NHES).

During the warmer months of the year in many parts of the country, facility air-conditioning loads are significant contributors to the increase in the daily peak electric demand.  Previous research uncovered that a stratified chilled-water storage tank can help displace peak cooling loads to off-peak hours.  Based on these findings, the objective of this work is to evaluate the prospect of using a stratified chilled-water storage tank as a potential TES reservoir for a nuclear reactor in a NHES.  This is accomplished by developing time-dependent models of chilled-water system components, including absorption chillers, cooling towers, a storage tank, and facility cooling loads synonymous with a large office space or college campus, as a callable FORTRAN subroutine.  The resulting TES model is coupled to a high-fidelity mPower-sized Small Modular Reactor (SMR) Simulator, with the goal of utilizing excess reactor capacity to operate several sizable chillers in order to keep reactor power constant.

A more suitable configuration entails integrating the absorption chillers into a flash vessel system that is thermally coupled to a sensible heat storage system.  The sensible heat storage system is able to maintain reactor thermal output constant at 100% and match turbine output with several different electric demand profiles.  High-pressure condensate in the sensible heat storage system is dropped across a let-down orifice and flashed in an ideal separator.  Generated steam is sent to a bank of absorption chillers.  Simulation results show enough steam is available during periods of reduced turbine demand to power four large absorption chillers to charge a 5-million-gallon stratified chilled-water storage tank, which is used to offset cooling loads in an adjacent facility.  The coupled TES systems operating in conjunction with an SMR comprise the foundation of a tightly coupled NHES.

Corey enrolled at North Carolina State University in 2009.  At NC State, he matriculated into the Mechanical Engineering degree program, where he developed a keen interest for heat transfer, thermodynamics, and energy systems.  After graduating summa cum laude with a Bachelor of Science in Mechanical Engineering in 2013, Corey continued his graduate studies at NC State under the direction of Dr. Stephen D. Terry investigating potential Thermal Energy Storage methods for use in Nuclear Hybrid Energy Systems.  In 2017, he earned his Masters of Science in Mechanical Engineering while pursuing his Ph.D.  His research focuses on developing time-dependent models of chilled-water storage system components to be used in conjunction with next-generation Small Modular Reactors (SMRs), with the goal of reducing thermal and mechanical stresses placed on the fuel elements and other reactor components during power maneuvers. 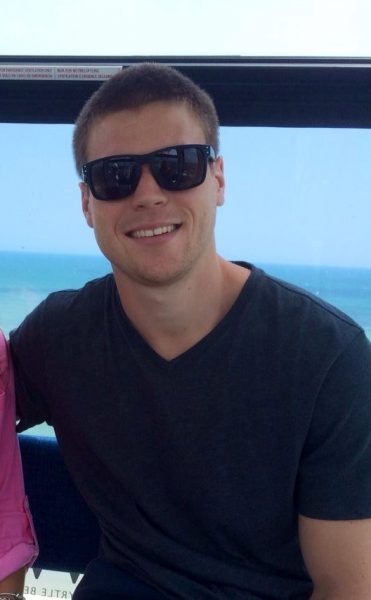