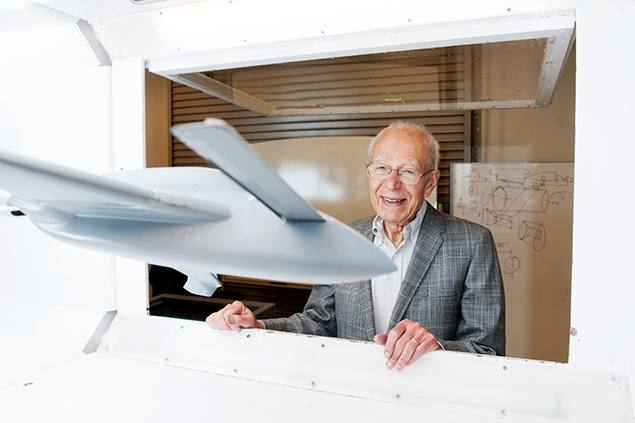 Dr. Hassan A. Hassan, Professor Emeritus in the Department of Mechanical and Aerospace Engineering, has endowed a graduate award through the American Institute of Aeronautics and Astronautics (AIAA).

Offered annually with its first recipient to be named in the 2019 year, The Dr. Hassan A. Hassan Graduate Award in Aerospace Engineering is a $5,000 per year award exclusively for North Carolina State University aerospace engineering seniors who plan to continue their education in the aerospace graduate program at NC State University.

A passion for all that is aerospace, Dr. Hassan joined NC State University in 1962 as a full professor, and helped create the Bachelor of Science in Aerospace Engineering program in 1964. Dr. Hassan spent every summer at NASA Langley Research Center together with an entourage of students working on research problems side by side with NASA researchers. He continued this practice for more than 30 years until the early 1990s – playing a critical role in the development of NASA’s in-house computational fluid dynamics codes with the special focus on predicting transition and separation – the features of aerodynamic flow that continue to challenge engineers today.

Dr. Hassan was the major adviser to thirty four doctoral students, authored more than two hundred publications, and has been recognized with numerous research awards including the Alcoa Foundation Distinguished Engineering Research Award, 1987, the Alumni Distinguished Graduate Professor, 1991, the NASA Public Service Medal, 1992, the R. J. Reynolds Co. Award for Excellence in Teaching, Research, and Extension, 1993, the AIAA Thermophysics Award, 1999, and the Alexander Holladay Medal For Excellence, 2004 – the highest honor bestowed on a faculty member by the NC State trustees.

More information about the award can be found here or visit https://www.aiaa.org/Scholarships/