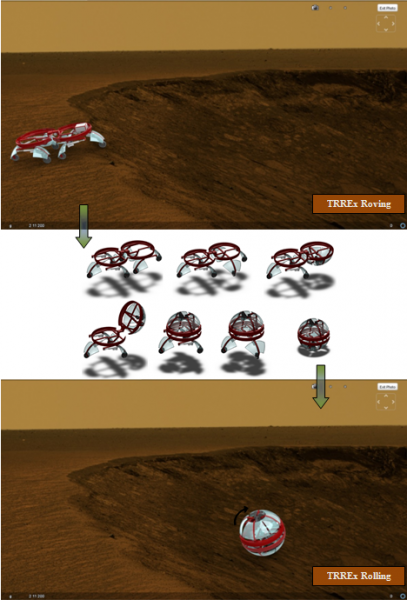 Over the years, numerous rovers have been sent to the Moon and Mars, but all of them have been limited in their mobility. For example, we have not yet been able to venture into craters or down ravines. With game changing developments over the past decade in robotic technologies, we are at a juncture in planetary exploration technology where we can transition from the conventional rocker bogie suspension rover design and start employing more unconventional designs. We have been constructing and evaluating one such design called the Transforming Roving- Rolling Explorer (TRREx) Rover.

Biologically inspired by the way the armadillo curls up into a ball when threatened, and the golden wheel spider uses the dynamic advantages of a sphere to roll down hills when escaping danger, the TRREx rover can traverse like a conventional 6-wheeled rover over conventional terrain, but can transform itself into a sphere, when necessary, to travel down steep inclines, or navigate rough terrain.

The technical feasibility and performance analysis of the rover is currently being investigated. The dynamics of a planar verstion of the rover is analytically modeled and an Earth prototype is being constructed* and evaluated. We believe this work represents an important step in developing a rover capable of traversing a variety of terrains that are impassible by NASA’s current fleet of rover designs, and thus has the potential to revolutionize planetary exploration.

*Acknowledgement: Custom linear actuators for the planar prototype were purchased from Ultra Motion 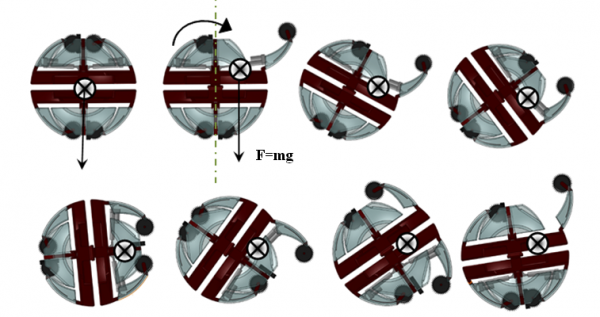 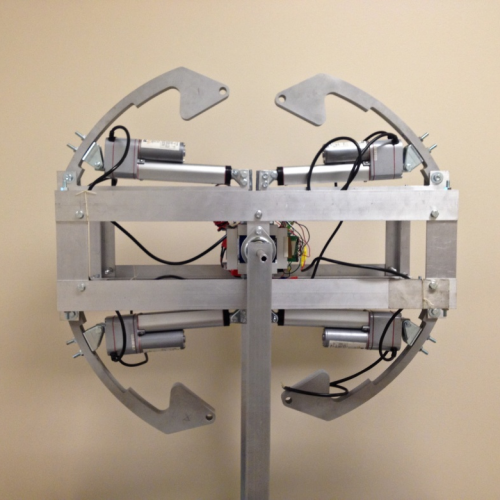 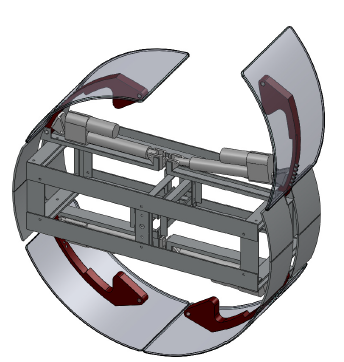 The Gulf Stream is a strong ocean current (with speeds up to 2m/s) that flows off the coast of North Carolina and thus, is an avenue for clean energy generation. A major challenge here is the variability in the position of Gulf Stream. To mitigate this design challenge, permanent turbine installations need to be replaced with a movable design concept, which can relocate to a favorable location based on a real time control strategy designed to optimize the power generation. Therefore, existing technology of tidal waves/ river currents/ wind currents energy harvesters can be applied here to develop an autonomous underwater vehicle (AUV) generator that efficiently extracts Gulf Stream (GS) Marine Hydrokinetic (MHK) Energy. This method presents several advantages when compared to several existing energy extraction technologies:
● Device will maximize energy extraction by remaining in the GS jet
● Does not require a permanent installation in the ocean thereby offsetting costs associated with laying long expensive underwater cables
● Leverages the improvements in battery technologies and combines existing technologies to efficiently extract energy
● Does not require changes to existing grid infrastructure 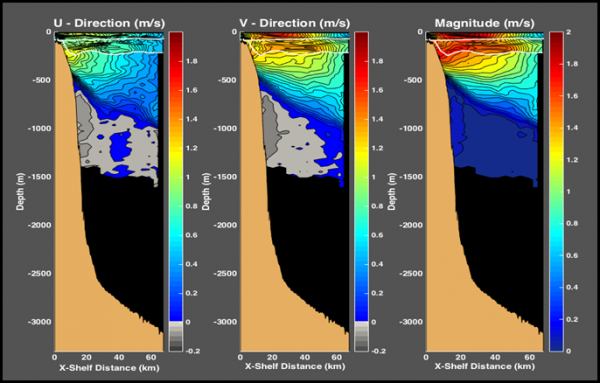 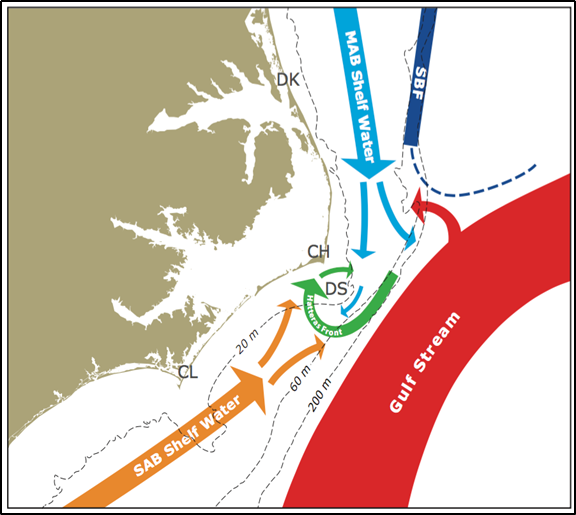 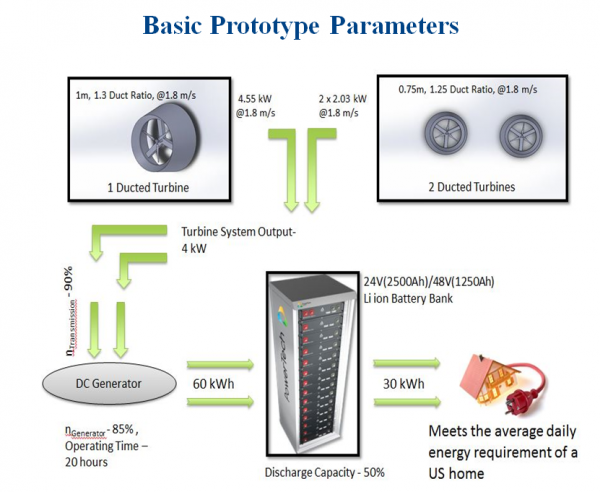 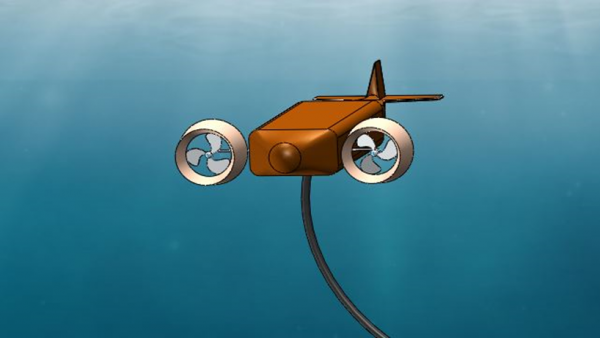 Power generation is the main design criteria around which other design aspects pivot. Other major design criteria include (a) Withstand hydrostatic pressure at depth of 100m for a long period of time, (b) Steady state characteristics during power generation, (c) Minimal power consumption by auxiliary on-board systems and while moving from one point to another.

Current work is on determining the scale and size of on-board power generation systems and designing a suitable prototype AUV generator. The design would not only include the CAD models but also the mass and power budgets. The feasibility of an OCAES system as an energy-storage device on board the AUV is also being explored.

The Tumbleweed is a Martian rover concept designed to cheaply and efficiently investigate broad swaths of the surface of Mars. The Tumbleweed concept is revolutionary in that it relies on the Martian winds for propulsion rather than heavy, expensive, and relatively short-lived motor-battery combinations. Preliminary data indicates that the Tumbleweed is capable of covering more ground than traditional rovers and, with the use of solar cells, having a much longer life span than traditional rovers.

Because the directional control of the Tumbleweed is limited, it must be able to survive over a wide variety of terrain types. Current EMSSL research focuses on developing a numerical simulation model predicting the motion of a Tumbleweed rover as it encounters real terrain scenarios. The research provides an understanding of the range of Tumbleweed design parameters essential for mobility over varied terrain and introduces a numerical model covering rover rolling, sliding, and bouncing behaviors and the transitions between these modes of movement.

A collision model based on Kane’s method of dynamics is used to study the impact between the rover and flat terrain. The model is extended by considering collisions on hills and the effects of drag and the Magnus force on the rover. A numerical model which tracks the motion of the rover and the transition between different terrain types has also been created. Rolling and slide models for a rover in motion have been developed for flat and sloping terrains. Several design case studies which demonstrate the utility of the EMSSL models have also been developed. 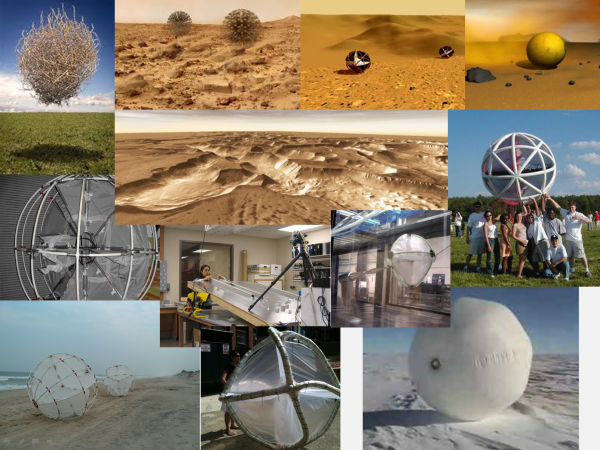 Several studies were conducted in the 1960’s and 70’s concerning the applications of interplanetary ramjets. These studies proposed using some type of magnetic or electrostatic technique to collect ions from the solar wind and feed them into a pulsed fusion reactor to generate thrust. At the 65th International Astronautical Congress (IAC) we introduced a variant of this type of propulsion system that avoids some drawbacks of previous designs (link to the paper). Consider a series of wires arranged as a cone with the large open end facing the sun. If the wires are highly positively charged and not farther apart than the solar wind plasma Debye length, then the protons in the solar wind will be repelled by the wires and cannot escape the cone. If nothing else was done, then the whole structure would be pushed along like a variant of an electric sail; however, if the focused, higher density plasma in the base of the cone is connected to an ion acceleration stage, then the protons can be accelerated out the small end of the cone at much higher velocities than they had when they entered the cone. This proton beam could then be directed in any desired direction to propel the spacecraft. We call this concept a Solar Wind Ion Focusing Thruster or “SWIFT”. 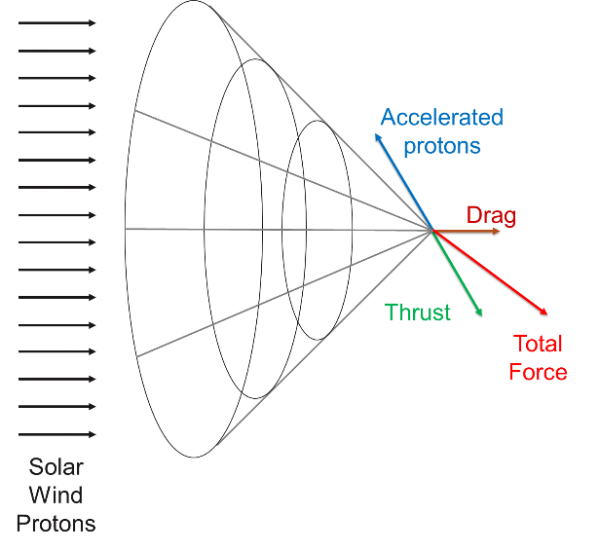 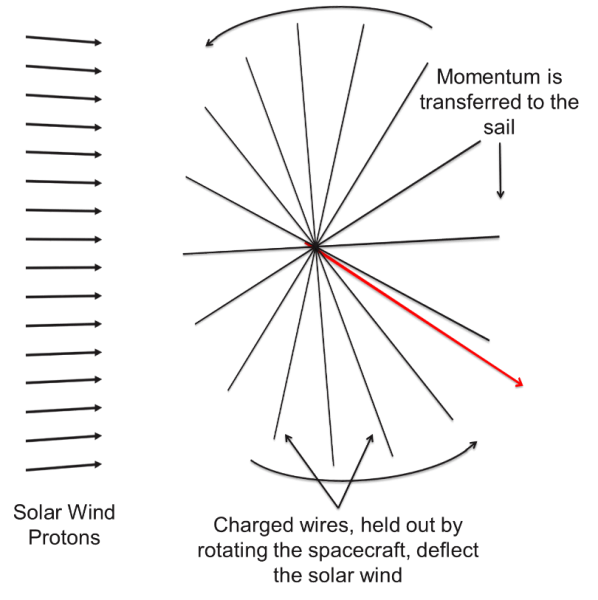 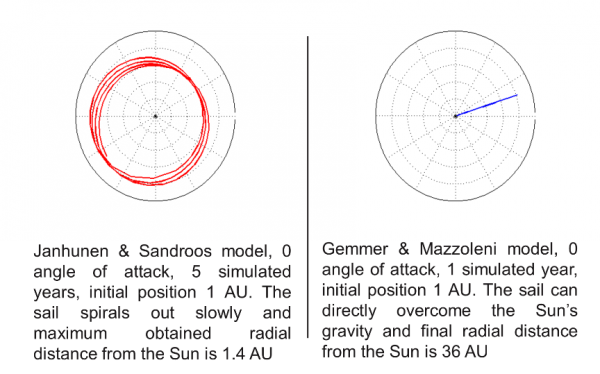 A similar system, known as the Electric sail, contains wires which are kept at a high electric potential to deflect solar wind particles (mainly H+), transferring momentum to the sail. Modeling the interaction of the solar wind plasma with the electric field of the charged wires is essential to predicting electric sail performance. EMSSL has modeled the Electric Sail trajectories for several missions, including missions to leave the solar system. A comparison between the two models shows the dramatic increase in predicted thrust, which is due mainly to the proton free sheath surrounding the wires being much larger than previously thought.

High altitude weather balloons provide a cheaper platform as compared to satellites to perform in situ measurements of planetary atmospheres, along with providing the ability to explore more terrain than a conventional rover. Current rover technology, similar to the Curiosity rover on Mars, can take up to 11 years to complete more than 20 miles of driving, while a balloon system, such as the Vega 1 and 2 balloons, are capable of encircling the planet in as little as a few days.

Building on a concept for a Trajectory Control System (TCS) put forth by Global Aerospace Corporation (GAC), research is being done to identify the optimal sail design for a balloon system for extra-terrestrial operations. The sail hangs with the spans of the wing and rudders parallel to the direction of altitude. This system behaves much like a sailboat in that the winds at the balloon altitude propel the system forward due to drag on the balloon and the small sail guides the system laterally. Due to the atmospheric density difference between the balloon altitude and sail altitude (several orders of magnitude), this guiding force is on the order of magnitude with the drag force on the balloon and thus provides latitude control to the system. Control velocities have been discussed for Earth and Venus based balloons [1,2]. A schematic of the system alongside the tether shape and wind speeds from an Earth based simulation can be seen in the figure below. 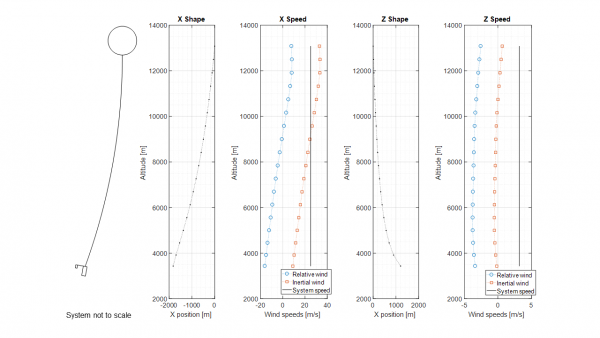 The following figure displays the preliminary results of trajectories achievable when using this system for a terrestrial balloon. 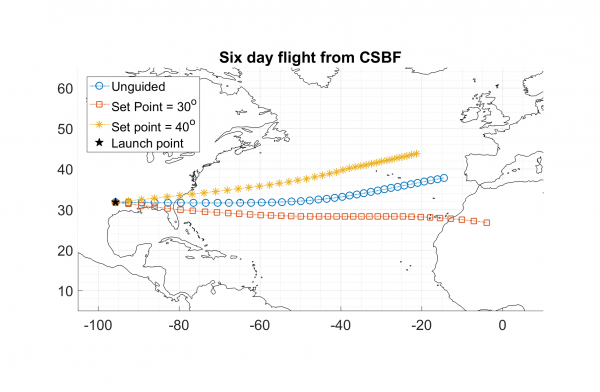 Experimental work at EMSSL is ongoing to determine the validity of the developed theoretical model. Before trajectory results may be examined, it is desired to confirm the shape of the tether due to wind loading. The shape of the tether used for a moored weather balloon case was studied using GPS nodes placed along the tether. The balloon carried a scientific gondola to take readings of wind speed, direction, and atmospheric properties. 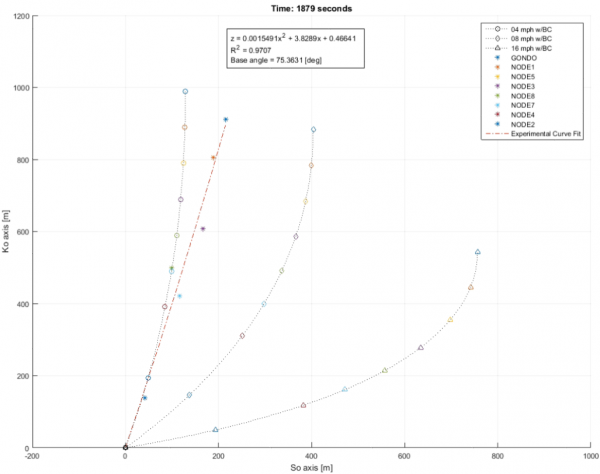 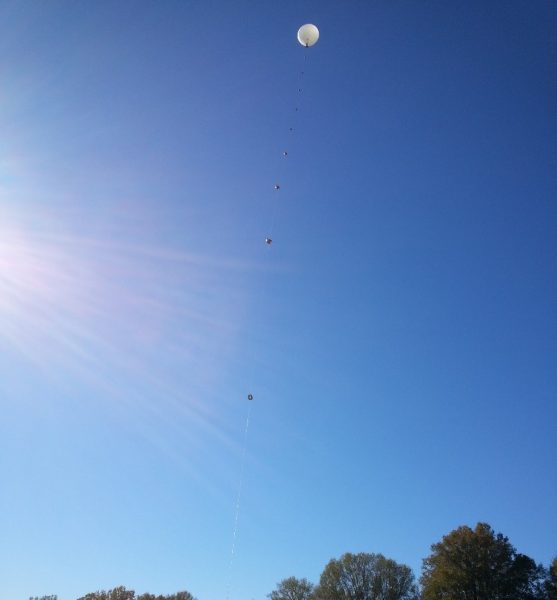 Compressed air energy storage (CAES) is a promising energy storage technology worth studying because CAES is a scalable, economical, and proven technology. In North Carolina, efforts to utilize the potential of offshore energy have begun and offshore compressed air energy storage (OCAES) systems are being examined as an energy storage option. Installation of an air storage container on the seabed not only avoids the environmental and safety issues of an inland facility, but also takes advantage of the hydrostatic pressure at the ocean floor which can keep the compressed air under storage at high pressure without the need for an expensive pressure vessel or underground cavern. We are currently working on thermodynamic models of the end-to-end process for OCAES, as well as developing novel technologies for compressing air isothermally to increase the efficiency of the process. In addition to computational modeling, several OCAES experiments are also being conducted. 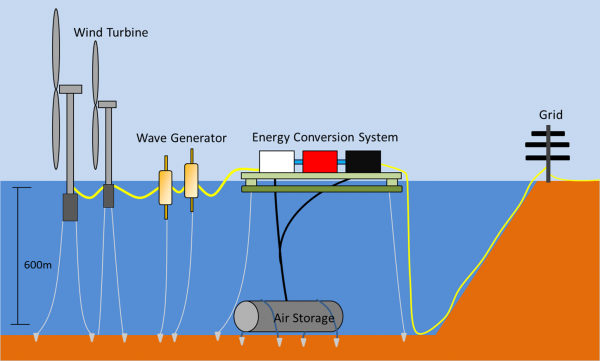 Biomechanics of the Spine, Degenerative Disc Disease and Scoliosis:

The spinal column, also called the vertebral column, is a complex system of bones, cartilage, muscles, and nerves that provide support and protection to the human body. The spine runs from the base of the skull to the pelvis and is made up of 33 bones called vertebrae that are separated by flat, circular intervertebral discs. With time and the repetitive loading and bending of the spinal column, intervertebral discs start to degenerate and become stiffer and thinner. This is called degenerative disc disease (DDD) and is the main cause of back pain and spinal disorders. To solve this problem, the first approach is a non-surgical treatment, including rest, heat, pain medication, therapy, and chiropractic manipulation. When the pain persists, surgical methods are used to help the patient. Currently the most widely used and approved method is spinal fusion, which consists of removing the degenerated disc and fusing the two adjacent vertebrae together by implanting bone in between. In recent years, artificial disc replacement (ADR) is emerging as a possible alternative to fusion. The concept of this procedure is to mimic as closely as possible the natural vertebral disc in a mechanical system and replace the damaged disc in the spine with the artificial disc. We are currently performing finite element and lumped parameter analyses of different treatments for degenerative disc disease, looking at single-level and multi-level spinal fusion and artificial disc replacement techniques. One of the issues we are particularly interested in is the interplay between scoliosis and degenerative disc disease and how the degree of curvature impacts the type of treatment available to patients with degenerative disc disease. 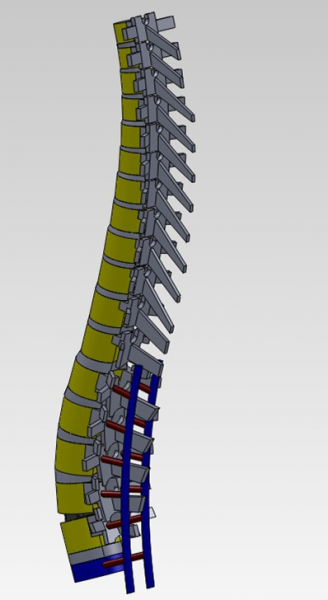 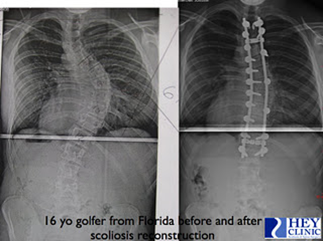 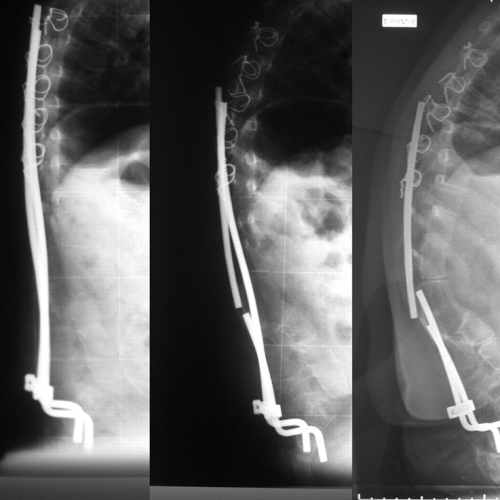