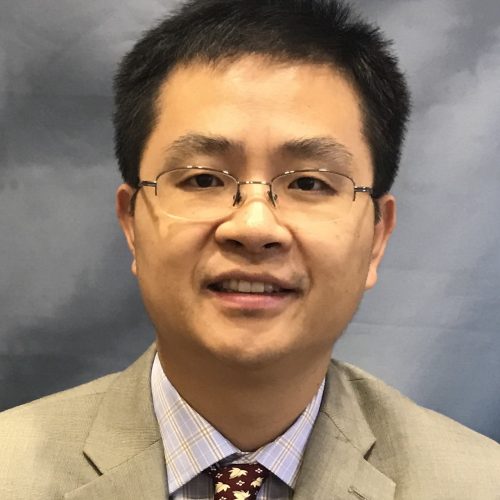 Dr. Zhu’s long-term goal is to advance nanoscience and nanotechnology by improving the understanding of nanoscale material behavior and exploring the applications of nanomaterials.

Dr. Zhu teaches Micro/Nano electromechanical Systems (MAE 536) for students interested in the fundamentals and the applications of micro/nano sensors and actuators. His lecture style course includes guest lecturers from industry and academia, and concludes with final projects of teams of 2 to 3 students in which the teams, based on the class material, propose and design micro/nano transducers for their intended applications, and study related scientific issues.

Dr. Zhu’s graduate students are self-motivated; they like both experimental and theoretical work, and tend to enjoy intellectually challenging, multi-disciplinary problems. The research they conduct in Dr. Zhu’s lab advances a major engineering frontier that may eventually lead to important new discoveries in the field of nanoscience and nanotechnology.

At the undergraduate level, Dr. Zhu teaches Solid Mechanics (MAE 314) and Strength of Mechanical Components (MAE 316). Both of these classes are taught following standard practices but he also includes in his lectures examples taken from his work on nano/micro devices.

Outside of work, Dr. Zhu enjoys travel and sports like basketball, swimming, and ping-pong.

University of Science and Technology of China

Dr. Zhu is interested in MEMS/NEMS design, fabrication and characterization; mechanics and materials issues in nanostructures and thin films; and flexible and stretchable electronics. Dr. Zhu is currently 1) developing micro/nano electromechanical transducers (NEMS/MEMS), 2) studying mechanical, electrical, and thermal inter-relations at the nanoscale, and 3) developing flexible and stretchable electronics for wearable and robotics applications.

Development of an In-Situ Testing Laboratory for Research and Education of Very High Temperature Reactor Materials
US Dept. of Energy (DOE)(10/01/20 - 9/30/21)

Sponsor: US Dept. of Energy (DOE)

A novel thermo-mechanical fatigue (TMF) testing system, referred by miniature TMF (MTMF) system has been developed at NCSU for in-situ testing of miniature specimens within Scanning Electron Microscopes (SEM). The MTMF is capable of prescribing axial-torsional loading to solid specimen and axial-torsional-internal pressure loading to tubular specimen of 1 mm diameter at elevated temperatures (up to 1000oC) to investigate deformation of microstructure and failure mechanism in real time. Currently, in-situ SEM testing with the MTMF is performed at the Analytical Instrumentation Facility (AIF) at NCSU. This poses a serious restriction to investigate failure mechanisms of very high temperature reactor (VHTRs) materials primarily because with a user facility, such as AIF, we can only perform short-term tests that span over few days. However, fatigue, creep and creep-fatigue tests for VHTR materials may span from few days to several weeks. Hence, existing SEMs on campus are not available for long-term in-situ testing of VHTR materials. Currently, fatigue, creep and creep-fatigue failure mechanisms of new and existing alloys are mostly investigated through ex-situ testing or short duration in-situ uniaxial testing within SEM. Consequently, initiation and propagation of many failure mechanisms, especially interactions between creep and fatigue mechanisms in reducing high temperature component lives remain unknown. Hence, developing a shared in-situ testing laboratory (ISTL) is essential to allow NCSU researchers to perform novel research on nuclear materials addressing issues of fatigue, creep and creep-fatigue failure mechanisms. The proposed ISTL dedicated to performing long-term fatigue, creep and creep-fatigue tests is in critical need to develop design criteria of VHTR materials for ASME Code Sec III Div 5. However, existing facilities at NCSU or any other universities or national labs in the nation do not have a facility dedicated to perform long term tests representing realistic loading conditions of VHTR. Therefore, a suitable SEM compatible with the MTMF system at NCSU is proposed to be acquired to develop an ISTL to address high temperature nuclear materials and ASME Code issues. With the availability of such a ISTL, uniaxial and multiaxial cyclic experiments prescribing realistic thermo-mechanical fatigue (TMF), creep and creep-fatigue loading can be performed on specimens of VHTR materials, such as Alloy 617, 316H, 800H, Grade 91 steel, for addressing the high temperature component design and development issues. Finally, because of the size of commercially available TMF systems, these cannot be used for in-situ SEM testing, which is essential for investigating existing alloys and developing new alloy for VHTRs. Hence, acquisition of a SEM will give the NCSU research community unprecedented capability to perform fundamental research and educate next generation scientists in studying real-time long-term microstructure evolution of nuclear materials under uniaxial and multiaxial loading. In addition, the proposed equipment will allow training undergraduate and graduate students and postdocs in performing material characterization using advanced techniques and provide hands on experiences to students in various undergraduate and graduate courses.

Emerging plant disease and pest outbreaks reduce food security, national security, human health, and the environment, with serious economic implications for North Carolina growers. These outbreaks may accelerate in coming decades due to shifts in the geographic distributions of pests, pathogens and vectors in response to climate change and commerce. Data-driven agbioscience tools can help growers solve pest and disease problems in the field more quickly but there is an urgent need to harness game-changing technologies. Computing devices are now embedded in our personal lives with sensors, wireless technology, and connectivity in the â€œInternet of Thingsâ€ (IoT) but these technologies have yet to be scaled to agriculture. Our interdisciplinary team will build transformative sensor technology to identify plant pathogens, link local pathogen data and weather data, bioinformatics tools (pathogen genotypes), and use data driven analytics to map outbreaks, estimate pest and pathogen risk and economic damage, in order to coordinate response to emerging diseases, and contain threats. Sensor-supported early and accurate detection of pathogens before an outbreak becomes wide-spread in growing crops will significantly reduce pesticide use and increase crop yields.

Nanomaterials such as metal nanowires play a fundamental role in enabling the unique properties of nanomechanical, and nano-electro-mechanical systems and devices. Most experimental and computational studies of the mechanical properties, plasticity and failure of metal nanowires have focused on intrinsic and extrinsic size effects, which cover changes in mechanical properties over multiple length scales. In contrast, due to shortcomings in both computational and experimental capabilities, the reliability of nanowires, which depend on deformation and plasticity over multiple time scales, and which is essential to predicting device performance over its lifespan, has not been widely investigated. Therefore, the goal of this proposal is to develop a fundamental understanding of how strain rate impacts the rate-dependent plasticity transitions, and thus the mechanical behavior and properties of metal nanowires.

The objective of this proposal is to develop and utilize novel in situ TEM nano-thermo-mechanical testing and atomistic modeling for elucidating the temperature, strain rate and sample size effects on the strength and brittle-to-ductile transition (BDT) in Si nanowires. While Si nanowires at room temperature have been measured with brittle fracture, our preliminary in situ testing inside transmission electron microscope (TEM) have shown that an increase of temperature can result in a fascinating BDT behavior in Si nanowires by activating the dislocation-mediated plastic deformation.

SNM: Printing and Integration of Metal Nanowires and Organic Semiconductors for Large-Area Stretchable Electronics and Sensors

Hand amputation can severely limit the quality of life such as manipulating and sensing objects or expressing gestures. Attempt to replace the lost hand can be traced back 500 years ago, reflecting the strong desire of restoring hand functions. Currently, many robotic prosthetic hands have been developed, that have the dexterity capability approaching a human hand. However, very few state-of-art prosthetic hands have been successfully translated to end users. One key factor that limit the user acceptance is the lack of natural and reliable sensory communication to the user. Specifically, the sensory feedback to the user was substituted through un-natural stimuli, such as skin vibration, visual or audio cues. These stimuli can be implemented readily, but require userâ€™s interpretation and conscious attention, imposing extra cognitive burden to the user. Alternatively, peripheral sensory nerves, transmitting haptic information to the central nervous system, can be activated electrically to provide natural haptic sensation. However, invasive open surgery procedures are typically required to implant electrodes interfacing with the nerves, and the resolution of elicited sensory regions is also typically low. To overcome these limitations, the objective of the current proposed project is to restore natural self-sensation of the missing hand via non-invasive grid electrodes, ultimately allowing arm amputees to explore and communicate with the world freely. The success of this project will completely transform the way for human being to communicate with robotic prostheses.

Biomarker-based immunoassays are specific and quantitative; however, they depend on intradermal or subcutaneous extraction of fluid. One of the hurdles to intradermal extraction is the stratum corneum, the uppermost layer of â€œdead skin.â€ A method to bypass the stratum corneum and extract or probe ISF would be an invaluable tool for the development of real-time health monitors. Herein the design, fabrication and evaluation of a nanocellulose-coated microneedle array (NMA) to extract ISF is proposed. The underlying microneedles will be molded from soft, compliant materials and subsequently coated in nanocellulose. The nanocellulose-coating enables the extraction of ISF by capillary force and diffusion; it is also a mechanically tough coating which will protect the soft underlying microneedle and support long-term use. The proposed platform represents the first step towards the realization of a transdermal ISF sensor.

A personâ€™s water content is crucial to the body, as it regulates body temperature, blood pressure, heart rate and etc. An accepted way to obtain the body water level is through hydration testing. One common method to characterize skin hydration levels is measuring skin electrical impedance. The objective of this project is to develop wearable sensor system that can continuously monitor skin hydration level. Such continuous monitoring could help prevent the wearer from falling into a severely dehydrated state. A compliant and wearable electrode is the key to continuous hydration monitoring.