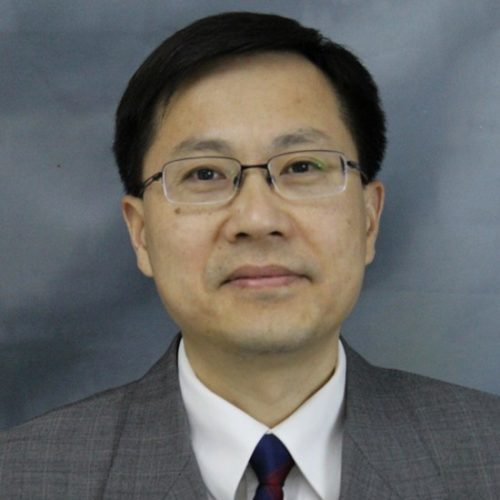 Dr. Jiang has 9 years of industrial experience before he joined NC State in 2009. At the graduate level, Dr. Jiang teaches micro-transducers incorporated with smart materials and micro/nanostructures (MAE 532). At the undergraduate level he teaches Solid Mechanics (MAE 314), Strength of Mechanical Components (MAE 316) Principles of Automatic Control (MAE 435), and Non-destructive Testing and Evaluation (MAE 440, with lab modules). As a faculty advisor, Dr. Jiang looks for hard-working students who have a strong background in physics and acoustics  and who are interested in developing strong instrumentation skills. His research is attractive to students who are interested in cutting-edge research in the biomedical, mechanical or aerospace areas, and who are interested in advanced imaging and therapy methods and techniques.

Jiang is interested in micro/nano-sensors, actuators and transducers and their applications in biomedical and aerospace engineering; ultrasound imaging for medical and industrial NDE/NDT applications; high power ultrasound therapy; sensors and actuators for extreme environment; and micro/nanofabrications with smart materials and structures incorporation. Presently, he is 1) conducting research in high-frequency and broadband ultrasound transducers for biomedical imaging, therapy and NDE, 2) developing electromechanical devices for extreme environments, and 3)  studying new smart materials and micro/nanostructures for energy conversion (harvesting, sensing, actuation).

In this pilot project, small aperture high intensity ultrasound transducers will be devloped and integrated into catheters, followed by in-vitro, ex-vivo and in-vivo intratumoral therpy tests.

A Piezoelectric Evaluation System with Controlled Environment for Characterizations of Relaxor-PT Single Crystals with Engineered Nanodomains
US Dept. of Defense (DOD)(5/01/21 - 4/30/22)

Sponsor: US Dept. of Defense (DOD)

A customized aixACCT piezoelectric system will be purchased for extensive characterizations of relaxor-PT single crystals with engineered nanodomains.

Assistive devices such as functional electrical stimulation (FES) and powered exoskeletons promote independence and recovery after a spinal cord injury or a cerebrovascular accident such as stroke. Substantial gains in recovery hinges on designing assistance synchronous with a user's impaired motor intent and actively encouraging them to bear effort. Including the intent or user's effort in their closed-loop control mostly relies on electromyography (EMG)-based models of limb force. However, EMG is a poor surrogate for modeling impaired muscle force generation as it fails to capture complex interaction between muscle's contractile behavior and the motor intent signals. Our recent preliminary data showed that a predictive model that fuses EMG with ultrasound predicts muscle forces with higher fidelity than an EMG-based approach. The combination allows incorporating ultrasound-derived mechanical measures of the muscle's contractile behavior, such as pennation angle, fascicle length, strain, strain rate, etc. Ultrasound-derived muscle strain measures also significantly correlated with the muscle force changes due to FES-induced muscle fatigue. Potentially, using ultrasound enables highly accurate monitoring of muscle force in real-time, which in turn facilitates symbiotic adjustment of exoskeleton assistance. Despite this intriguing proposition, a lack of wearable ultrasound sensors hinders the practical integration of ultrasound with an exoskeleton or FES. Although wearable single ultrasound transducers and EMG electrodes exist, wearable multiple US transducers embedded in an array for smart health applications are non-existent. If successfully translated to practice, an ultrasound-based sensing array would help visualize spatially distributed muscle fibers' contractile behavior and muscle force production, preferably in more than one imaging plane. When merged with EMG and stimulation electrodes, the array would capture descending volitional neural signals and multiple muscles' stimulation. Acoustically matched ultrasound transducers and stimulation electrodes permit simultaneous monitoring and actuation (via FES) of spatially distributed muscle fibers. This unique merger of technologies is also motivated to abate muscle fatigue effects due to FES, which, if unaddressed, could potentially cause falls or unstable control of an exoskeleton and its integrated FES system. Our objective here is to create a new wearable novel multimodal muscle-machine interface that combines dynamic in vivo ultrasound imaging with EMG signals. The innovative combined use of ultrasound and EMG in the muscle-machine interface provides objective in vivo visualization, and muscle action measurement caused volitionally by neural signals from the spinal cord or artificially via FES. The main objectives of the proposal are 1) development of a flexible and stretchable, body-conforming sensing array composed of EMG electrodes and ultrasound transducers, 2) use the feedback from the sensing arrays to synchronize exoskeleton assistance with a user's impaired motor intent, and 3) validate the sensing array to measure muscle force changes due to a new FES technique that uses a spatially distributed sequential stimulation (SDSS) method, and 4) use the feedback from the sensing array to coordinate the SDSS method with an exoskeleton.

Over 11 million people in the United States are affected by unintentional and uncontrollable rhythmic movements due to parkinsonian tremor, essential tremor, and cerebellar tremor. Individuals experiencing tremors in the hands and arms face difficulty performing activities of daily living. Electrical stimulation that works by stimulating motor (efferent) nerves of antagonistic muscles is a potential wearable option for tremor suppression when medication is ineffective, but prior to the pursuit of effective yet invasive (and costly) brain surgery. However, the two significant drawbacks of electrical stimulation are stimulation-induced muscle fatigue and discomfort due to high levels of stimulation. An intriguing new method of stimulation targets afferent nerve fibers to inhibit tremor in antagonistic muscles. These fibers relay sensory information on muscle position and velocity back to the spinal cord. By stimulating these fibers, spinal neural circuitry can be modulated that in turn inhibits muscle activity due to the descending tremor inputs from the brain. The new method uses low stimulation intensity levels, which is comfortable and fatigue resistant. However, determining the stimulation parameters that can effectively disrupt tremors remains challenging, largely due to the numerous interactions that can occur between stimulated afferent nerves and the descending tremorgenic neural inputs. These interactions occur through a complex neural circuitry whose modeling is difficult and computationally intensive for determining stimulation parameters in real-time. Direct measurements of muscle velocity and length changes with ultrasound can help create a data-driven model of afferent stimulation and help design individual-specific afferent stimulation parameters. However, ultrasound has never been used for tremor suppression control. Real-time algorithms and models that map ultrasound-derived muscle activity to oscillating limb displacement will be established. These algorithms and models will automate individual-specific stimulation parameters for tremor suppression. Lastly, for future clinical translation wearable ultrasound arrays that monitor multiple muscles will be developed.

Sponsor: US Navy-Office Of Naval Research

In this project, alternating currenting poling of ternary relaxor-PT piezoelectric single crystals will be investigated for enhanced properties.

In this project a small aperture high intensity focused ultrasound transducer will be developed for tissue ablations.

We will develop ultrasound probe tracking techniques to collect real-time position, and orientation information that is synchronized with the sonograms. The proposed probe tracking system can be used for automatic ultrasound scan for medical imaging.

The research goal is to understand how thermal conductivity of ferroelectric materials can be switched with external electric fields and how this switching behavior can be engineered through the reconfigurable ferroelectric domains. This is motivated by the possible new paradigm of energy regulation for harvesting, saving, and management if dynamic control of thermal energy transport can be achieved. Seeking solutions for thermal control in materials are limited by the traditional toolkit of linear, static, and passive thermal components, such as thermal resistors and thermal capacitors. This paucity of thermal options pales in comparison to the rich selection of highly nonlinear, switchable, and active components in the electrical domain. Since switchable and nonlinear thermal components are not nearly as mature as their electrical counterparts, the pursuit of these thermal components remains a motivating interdisciplinary challenge to researchers for years. In this project, we will measure the thermal conductivity- domain structure correlation to reveal the effects of domain walls and domain engineering. The studies on the manipulation of domain walls using domain engineering has translational implications for a range of applications, such as infrared imaging, solid-state cooling, and waste-heat energy conversion due to pyroelectric and electrocaloric effects, and sensors based piezoelectric effects.

In this project, a dual mode ultrasound array will be developed for thermal strain imaging.