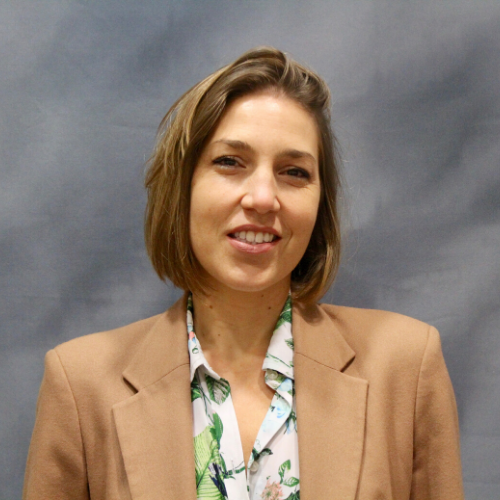 Her  research attracts students because of its high societal impact, because it involves both theory and the learning about state-of-the-art numerical and experimental methods, and because it involves teamwork and collaborations with physicians, physicists and engineers. Since her research is multidisciplinary, students in her lab have the opportunity to tailor their graduate experience to their particular interests. Some of her research is also likely to find its way to other applications, such as methods for assessing properties of new bio- and conventional materials.

In MAE, Dr. Muller collaborates with Dr Jiang, Dr Zikry and Dr Saul. She offering a new graduate course in the area of advanced acoustics addressing the applications of elastic waves to medicine and non-destructive testing.

Outside of work, she enjoys family, friends, and food, as well as the martial arts.

The focus of Dr. Muller's research is on the development of new sources of imaging contrasts that provide diagnostically relevant information. Her approach is based on understanding the propagation of ultrasound and elastic waves in biological tissue, and to establish quantitative relationships between ultrasound parameters and the microarchitecture of tissue. Ongoing research in my lab addresses bone, soft tissue and porous materials. The projects include: (1) Bone microarchitecture modelling and assessment; (2) Characterizing vascular networks; (3) The fundamentals of multiple scattering in tissue.

The objective of this research is to develop and validate novel ultrasound-based methods for the detection and localization of pulmonary nodules during minimally invasive thoracic surgery - Video Assisted Thoracic Surgery (VATS), and robotic surgery. Lung cancer is the leading cause of cancer deaths in the U.S., with over 220,000 new cases diagnosed each year. VATS and robotic surgery are performed to resect a pulmonary nodule, for diagnosis and therapeutic purposes. Pulmonary nodules are detected by CT scanning. However, during the surgery, pulmonary nodules can be extremely difficult to locate precisely. Small nodules might be extremely difficult to feel. Therefore, there is no guarantee that the nodule will be in the resected region of the lung parenchyma. This results in positive margins and sometimes a complete miss of the tumor in the resected lung wedge. The objective of this research is to develop novel ultrasound sequences, specific to the lung, exploiting the very complex properties of ultrasound multiple scattering in the lung parenchyma. Our approach is based on the following paradigm: Because pulmonary nodules are not filled with alveoli, they will not be responsible for as much multiple scattering as the healthy parenchymal tissue. We propose that mapping the amount of multiple scattering in the parenchyma will enable us to map pulmonary nodules in real time. We will develop ultrasound sequences and signal processing methods to quantify the amount of multiple scattering locally. In the future, the developed sequences will be implemented on an ultrasound probe placed in a flexible bronchoscope, which will be used during surgery to locate and ensure proper resection of pulmonary nodules.

Innovative ultrasonic methods for the diagnosis and monitoring of pulmonary fibrosis
US Dept. of Defense (DOD)(4/15/18 - 4/14/20)

Innovative ultrasonic methods for the diagnosis and monitoring of pulmonary fibrosis

Sponsor: US Dept. of Defense (DOD)

Chronic wounds affect over 6.5 million patients in the United States alone and result in health costs of over $25 billion annually. Aging, obesity and diabetes increase the risks of non-healing wounds, and given the aging population and rise in diabetes and obesity, the healthcare burden associated with chronic wounds is only expected to increase in coming years. These statistics highlight that improper wound healing is a major and intensifying threat to both global health and the economy; unfortunately, because chronic wounds are frequently associated with a comorbid condition, the threat of is condition to public health and the economy is often overlooked. Proper wound healing is the result of a large number of interrelated biological events, which are orchestrated temporally in response to the injury microenvironment. Importantly, mechanical stimulation is a central cue to orchestrating cell behaviors during wound healing including proliferation, migration and extracellular matrix (ECM) production. Immediately following injury, a clot is formed which involves the formation of a platelet plug embedded within a fibrin mesh. Platelets bind multiple fibrin fibers and actively apply forces to contract the network, thereby stabilizing the developing clot. Furthermore, platelet-mediated clot contraction is thought to augment wound healing following cessation of bleeding by providing mechanical stimulation to surrounding cells. We have designed highly deformable platelet-like particles (PLPs) that mimic this clot contraction feature of native platelets by imparting high-affinity, high-specificity interactions with fibrin polymers (but not the soluble precursor fibrinogen). To maximize specific interactions with fibrin networks, we utilize highly deformable, ultra-low crosslinked Poly(N-isopropylacrylamide) (pNIPAm) hydrogel microparticles (Âµgels) displaying multiple chemoligation sites as the base material for PLPs. To impart fibrin polymer specificity to the Âµgels, humanized synthetic single domain variable fragment (sdFv) antibodies with high affinity for fibrin, but not fibrinogen, were identified through molecular evolutionary techniques and then coupled to the Âµgels. These PLPs are capable of recapitulating a number of functions of native platelets, including augmentation of clotting of human plasma in vitro and decreasing bleeding times in rodent bleeding models. Our recently published study in Nature Materials shows that the high deformability of the Âµgels allows the PLPs to contract clots reminiscent of native platelets. In this application, we utilize ultrasound to enhance PLP-mediated clot contraction to delivery mechanical stimulation to cells in a chronic wound site to stimulate wound healing. This approach is paradigm shifting for treatment of chronic wounds; few strategies attempt to engage the mechanically sensitive pathways critical for proper wound healing, and those that do cannot deliver micromechanical stimulation in a controlled manner. Examples of important mechanically sensitive pathways in wound healing include Rho GTPase signaling, actin cytoskeleton engagement and mechanical activation of transforming growth factor beta (TGFÎ²), which leads to fibroblast activation and myofibroblast differentiation. The PLP technology described herein induces mechanical stimulation through a collective Brownian wrench mechanism to collapse the local matrix, inducing both global and cell-scale deformations. This tunable response allows for precise control over delivery of mechanical cues and provides the ability to supply stimulation at levels that promote healing without fibrosis. The overall objective of this proposal is to augment wound healing by combining PLP-mediated clot contraction with ultrasound therapy. Our central hypothesis is that ultrasound will accelerate PLP-mediated clot contraction in a well-controlled manner by increasing interactions between PLPs and fibrin networks, and significantly improve wound healing by providing mechanical stimulation to surrounding cells. In this proposal we will first

Atherosclerosis is the leading cause of morbidity and mortality in Western countries, in large part due to plaque rupture. Vulnerable plaques are the most likely to rupture, being the major cause of acute myocardial infarction and sudden cardiac death. Neovascularization of the arterial walls by adventitial vasa vasorum appears to participate in the progression of atherosclerosis and atherosclerotic plaque neovascularization was shown to be one of the strongest predictors of future cardiovascular events. No techniques are currently available for the quantitative assessment of vulnerable plaque, which remains an unmet need. Microbubbles are extremely powerful contrast agents for ultrasonic imaging of the vasculature and Contrast Enhanced IntraVascular UltraSound (CE-IVUS) seems to be one of the most promising imaging modalities for the detection of atherosclerosis and vulnerable plaque. However, although this technique allows the detection of the vasa vasorum, CE-IVUS currently does not provide a quantitative characterization of its micro-architecture. The specificity of CE-IVUS has to be improved. A quantitative assessment of the vasa vasorum network in vivo would strongly predict cardiovascular events yet no such techniques currently exist. We propose using ultrasound multiple scattering to characterize the microstructural properties of neovascular networks. By using ultrasound multiple scattering to characterize the architecture of the neovascularization, we will add a new dimension to CE-IVUS. With the technique we propose to develop here, CE-IVUS will not only be used for the detection of plaque related neo-angiogenesis, but also for its characterization. This will dramatically increase the specificity of CE-IVUS for the assessment of plaque vulnerability. It will enable the ultrasonic assessment of the vasa vasorum to become a widely used clinical tool for screening, diagnosis and monitoring of plaque vulnerability.

Osteoporosis modifies the microarchitecture of trabecular bone by increasing the trabecular spacing and the anisotropy. Assessing these parameters will improve the assessment of bone mechanical competence, and will allow the prevention of spontaneous vertebral fractures. A quantitative, non-invasive and non-ionizing characterization of bone micro-architecture is currently not possible in vivo. The ultrasonic characterization of the biomechanical properties of bone has the potential to improve fracture risk assessment with a non-invasive, relatively inexpensive method that doesn't rely on ionizing radiation. Several independent research results suggest that multiple scattering of ultrasonic waves by bone heterogeneities plays an important role in the bone-ultrasound interaction. We propose to develop ultrasonic techniques that characterize bone micro-architecture based on multiple scattering. Our objectives for this project is to develop ultrasonic techniques for the measurement of bone micro-architecture on bone samples in vitro. The results will be validated by comparing the parameters measured with ultrasound (trabecular spacing and anisotropy) to the actual parameters of the micro-architecture measured with X-Ray Computed Tomography.

Our objective is to improve the diagnosis and monitoring of spaceflight osteopenia through the determination of micro-structure of trabecular bone from ultrasonic measurements. In spaceflight osteopenia, the absence of gravity leads to reduced stresses on the body, which is believed to impair the process of bone remodelling. As a consequence, bone loss is experienced by astronauts, as well as modifications of the trabecular micro-architecture. Ultrasound waves in the MHz range are subjected to multiple scattering by the trabeculae during propagation in bone. The resulting ultrasonic signals are complex and embed information on the micro-architecture. We propose to test the hypothesis that when multiple scattering occurs there is a measureable relationship between ultrasonic parameters and micro-architectural parameters, such as trabecular spacing and anisotropy. To determine this relationship we will establish a model of ultrasonic propagation in trabecular bone based on the scattering theory of elastic waves in a complex heterogeneous environment. We will identify a set of ultrasound parameters quantitatively related to specific micro-architectural properties such as anisotropy, trabecular spacing and connectivity. We will develop a practical, model-based strategy for the monitoring of bone micro-architectural properties during space flight.