SEMINAR: Nonlinear Dynamics: A Journey Through Experiments and Computations

Dynamics of a variety of mechanical and structural systems need consideration of nonlinearities. In this talk, a collection of experiments and computations conducted to further our understanding of nonlinear dynamics will be presented. The experimental and computational findings will be explained with the help of analytical studies. Grazing dynamics, energy localization, slow-scale and fast-scale decompositions, delay dynamics, and buckling influenced oscillations will be considered to illustrate the ubiquitous presence of nonlinearity influenced phenomena across length scales. Relevance of the work to different systems in practice ranging from space structures to AFM systems to drilling systems to rotary systems will be discussed.

Dr. Balachandran received his B. Tech (Naval Architecture) from the Indian Institute of Technology, Madras, India, M.S. (Aerospace Engineering) from Virginia Tech, Blacksburg, VA, USA and Ph.D. (Engineering Mechanics) from Virginia Tech.  Currently, he is a Minta Martin Professor of Engineering at the University of Maryland, where he has been since 1993. His research interests include nonlinear phenomena, dynamics and vibrations, and control. The publications that he has authored/co-authored include  a Wiley textbook entitled “Applied Nonlinear Dynamics: Analytical, Computational, and Experimental Methods” (1995, 2006), a Cambridge University Press textbook entitled “Vibrations” (2019), and a co-edited Springer book entitled “Delay Differential Equations: Recent Advances and New Directions” (2009). Currently, he serves as the Editor of the ASME Journal of Computational and Nonlinear Dynamics and a Contributing Editor of the International Journal of Non-Linear Mechanics.  He is a Fellow of ASME and AIAA and a senior member of IEEE. 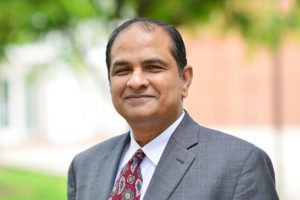