Irradiation of crystalline solids by high-energy particles such as electrons, ions and neutrons disturb lattice atoms and can lead to detrimental degradation in nuclear materials by producing lattice defects of various sizes, often known as radiation damage. On the other hand, the excess energy and enhanced kinetics introduced by irradiation take the systems into states far-from-equilibrium, where several fascinating self-organization phenomena have been identified, suggesting the possibility of tailoring microstructure using irradiation. This talk focuses on the self-organization of 3D void and gas bubble superlattices. The nature of such self-organization has remained unclear for decades since the very first observation.

Voids in materials under irradiation typically exhibit a life cycle involving nucleation, growth, and coarsening, usually with a disordered distribution. Here we show that at certain conditions the so-called chemical freezing of phase separation may take place and lead to the self-organization of nanoscale superlattices, in which voids precisely adopt the symmetry of certain crystal lattices. The superlattice parameter, or the characteristic length, is governed by the interaction between phase separation and chemical reaction (e.g., the recombination between irradiation produced vacancies and self-interstitials). The lattice symmetry is determined by the kinetic anisotropy in self-interstitial diffusion. A length scale is found to be associated with the kinetic effect, rendering the void superlattice a nanoscale phenomenon. With such, a theoretical framework is established capable of predicting both the superlattice parameter and symmetry. The predictions are validated by atomistic simulations and ion implantation experiments with high-resolution TEM characterization, as well as experimental data from the literature. The new theory will be impactful in guiding experimental design for tailored microstructure using irradiation, and in general in elucidating how kinetic anisotropy may affect pattern selection in systems involving phase separation and chemical reaction. 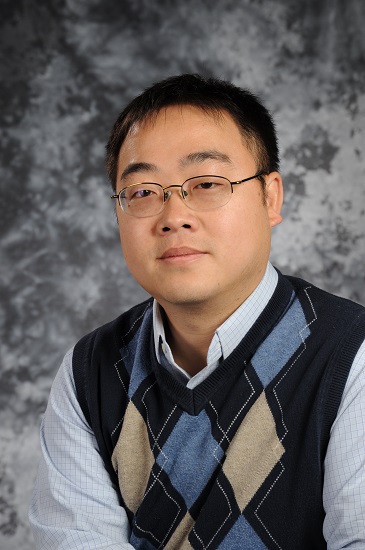 Dr. Yongfeng Zhang is currently a staff scientist at Idaho National Laboratory. He leads the Computational Microstructure Science group in the Fuels Modelling and Simulation Department. He has served as the PIs of multiple work packages under the Department of Energy (DOE) nuclear energy advanced modeling and simulation (NEAMS) program and the US high performance research reactor (USHPRR) program, and three laboratory directed research & development (LDRD) projects. He is also the co-PIs of a core program and an Energy Frontier Research Center supported by the DOE Office of Science. Dr. Zhang graduated from Rensselaer Polytechnic Institute with a doctorate degree in mechanical engineering in August of 2009 and joined INL after that. His research focuses on materials behavior in extreme conditions including high temperature, stress, irradiation and corrosive environments. He has authored or co-authored over 50 peer-reviewed journal publications and delivered over ten invited talks at conferences and universities. He is the recipient of the Laboratory Director’s Award for Leadership for 2016