In the recent past, applications for nanoscale devices seem to be ever increasing creating a growing need to ensure reliability and predictive modeling capabilities. Consequently, this has motivated extensive research and discussion on the mechanical behavior and deformation mechanisms in nanocrystalline metals.  As characteristic length scales shrink (< 100 nm), most nanocrystalline metals exhibit unique or different deformation mechanisms to those active in bulk and coarse-grained material counterparts. For example, in face-centered cubic (fcc) metals, deformation occurs predominantly through the motion and interaction of partial dislocations and grain boundary driven mechanisms, rather than perfect dislocation mediated slip. This transition in deformation mechanisms from conventional slip to partial-mediated slip can alter many elementary dislocation processes, such as cross-slip, nucleation, lock formation, and grain boundary mobility, and also result in unique material behavior including high strength. Furthermore, it has been shown that in nanoscale grain sizes grain-boundary driven mechanisms such as dislocation emission and absorption at grain boundaries, grain boundary sliding, and deformation twinning become dominant.

The purpose of this research is to investigate these nanoscale deformation processes through the development and application of a 3D phase field dislocation dynamics (PFDD) model.  The phase field approach is centered on energy minimization; hence evolution of the phase field variables has a direct dependence on system energetics. The total system energy is comprised of several contributions that can depend on the problem of interest.  Most common are elastic contributions that take into consideration dislocation-dislocation interactions, interactions with an applied stress, and a generalized stacking fault energy term. In particular, the latter term is used to model extended stacking faults and partial dislocations.  In this case, the 3D PFDD model can be informed directly by atomistic simulations in order to incorporate a dependence on the entire material γ-surface as opposed to only one or two stacking fault energies.  Additionally, this third energy term can be used to account for the directional motion of dislocations as in body-centered cubic (bcc) metals, where edge dislocations are easier to move than screw dislocations due to differences in the dislocation core structure.  Adjustments to other energy terms have made it possible to address dislocation transmission through interfaces, such as fcc/fcc bimetal interfaces and grain boundaries. The PFDD approach will be presented and recent results addressing dislocation transmission through interfaces along with extensions for bcc metals will be discussed.

Dr. Abigail Hunter is a staff scientist at Los Alamos National Laboratory (LANL) in the X Computational Physics Division.  She received a Ph.D. in Mechanical Engineering from Purdue University in 2011, and a B.S. degree in Mechanical Engineering from the University of Utah in 2006.  Following her Ph.D., she became a postdoctoral research associate at LANL in 2011, and converted to a staff scientist in 2012.  Recently in 2019, she was awarded the Presidential Early Career Award for Scientists and Engineers. 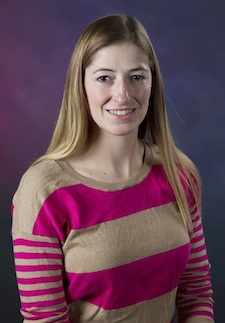