Soft and hydrated materials that consist of polymeric network and solvent are ubiquitous in nature from cells, tissues to organs. They are also important engineering materials. For instance, various hydrogels have been widely used as cell culture scaffold, drug carrier, wound dressing, microfluidic device, sensors, actuators, soft robots, fuel cell membrane, and many others. Defying the classical definitions of solid and fluid, these materials are both solid-like and fluid-like. The liquid component also provides an ideal media to host chemical reactions. The coupled liquid flow, chemical reaction, and network deformation make the response of the materials sufficiently complex that ample room exists for new understandings connecting mechanics, chemistry and materials. In the first part of this talk, I will present a rigorous nonequilibrium thermodynamic framework that couples large deformation, reaction and diffusion to study the fully coupled chemomechanical behaviors of these soft hydrated materials. With specific examples, I will demonstrate that such a model can be used to facilitate precise engineering design and unravel new physics in both synthetic and biological soft materials. In the second part of this talk, I will discuss our efforts in developing robust mechanical testing methods for characterizing the diffusion coupled deformation behavior of soft hydrated materials. The specific technique we developed is based on the indentation method. Within the theory of poroelasticity for coupled diffusion and deformation, we showed that a unified solution could be obtained for cylindrical punch, spherical indenter and conical indenter. The solutions are summarized in remarkably simple forms allowing the material parameters including both mechanical and transport properties to be extracted with ease. The method is demonstrated on various gels using AFM. 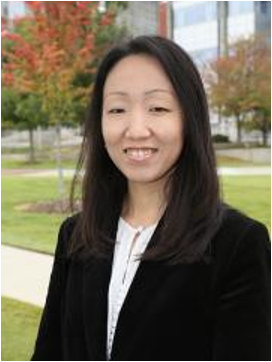 Dr. Yuhang Hu is currently an associate professor in the George W. Woodruff School of Mechanical Engineering and School of Chemical and Biomolecular Engineering at Georgia Institute of Technology. Dr. Hu received her B.S. degree in Engineering Mechanics from Shanghai Jiao Tong University, P. R. China in 2005, M.S. degree in Civil and Environmental Engineering from Nanyang Technological University, Singapore in 2007, M.S degree in Applied Physics from Harvard in 2009, and PhD degree in Engineering Sciences from Harvard in 2011. She was a Postdoctoral Fellow in the Wyss institute at Harvard from 2011-2014 studying Bio-inspired Materials. In 2015, she joined the faculty of Mechanical Science and Engineering at University of Illinois at Urbana Champaign as an assistant professor and moved to Georgia Tech in 2018. Her research focuses on Chemomechanics of Soft Active Materials, an interdisciplinary area between Mechanics and Polymer Chemistry. Her work involves both theory and experiment. She is the recipient of the NSF CARRER Award, AFOSR YIP Award, Extreme Mechanics Letters Young Investigator Award, Journal of Applied Mechanics Award, ASME Sia Nemat-Nassar Early Career Award, ASME Eshelby Mechanics Award, SEM James W. Dally Young Investigator Award, and SEM Wolfgang Knauss Young Investigator Award.