Many reduced order modeling (ROM) techniques for flexible aircraft have been presented for fast aeroelasticity (AE) analysis and control synthesis. However, a foremost challenge to constructing parametric state-space AE ROMs is how to retain their state consistence at different flight conditions, and the inconsistent ROMs could lead to physically meaningless ROM interpolation and failure to accommodate the entire flight parameter space. This seminar presents a new system identification method that combines state consistence enforcement (SCE) and the genetic algorithm (GA) to automate construction of parametric AE ROMs. A new regularization term is proposed to modify the traditional AutoRegressive eXogenous (ARX) formulation and specifically penalize state inconsistence between ROMs at different flight conditions. The new formulation cast in the form of the generalized Tikhonov regularization problem can be computed efficiently and produce fundamentally state-consistent ROMs. Furthermore, GA is used to find optimal hyperparameters to automatically configure SCE-ARX that balances between state consistence and ROM accuracy. The GA-guided SCE-ARX ROM is compared with the parametric ROMs generated by ARX, SCE, and GA-guided ARX, and the results demonstrate that the proposed approach significantly improves state consistence and interpolation accuracy of ROMs at varying flight conditions. To the best of our knowledge, this research also represents the first effort for establishing parametric state-consistent aeroelastic ROMs in a broad flight envelope. 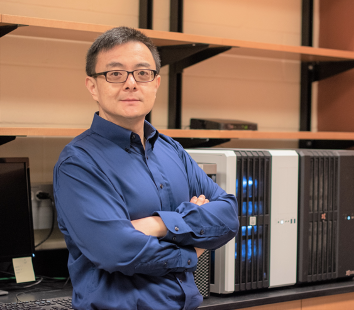 Yi Wang is an associate Professor in mechanical engineering at the University of South Carolina (UofSC). He completed his PhD at Carnegie Mellon University in 2005 and obtained his B.S. and M.S. from Shanghai Jiaotong University in China in 1998 and 2000, respectively. In the period from 2005 to 2017, he has held several positions of increasing responsibility at the CFD Research Corporation (CFDRC), Huntsville, Alabama. In 2017, he joined the University of South Carolina to start his academic career. His research interests focus on computational and data-enabled science and engineering (CDS&E), including reduced order modeling, large-scale and/or real-time data analytics, system-level simulation, computer vision, and cyberphysical system and autonomy with applications in aerospace, unmanned systems, manufacturing, and biomedical devices. He has been a PI or an institutional PI of over 55 projects sponsored by DoD, NIH, MDA, NASA, DOT, and industries, and has published over 120 papers in referred journals and conference proceedings. He is also the recipient of the 2021 Research Breakthrough Star Award of UofSC.