The first goal of this research is to develop mission planning code to match powertrain components for a small-scale unmanned aerial vehicle (UAV) to complete a standard surveillance mission within a set of user input parameters. The second goal is to promote low acoustic profile loitering through mid-flight engine starting. The two means by which this will be addressed is through reverse thrust from the propeller and a servo actuated gear to couple and decouple the engine and motor.

The mission planning code calculates the power required to complete a mission and assists the user in sourcing powertrain components. The weight of the selected components is added to the initial mass of the system and the power requirement calculations and component sourcing will be rerun until the system weight is minimized. Reverse thrust engine starting involves characterizing an off the shelf variable pitch propeller and using its torque coefficient to calculated the advance ratio required to provide sufficient torque and speed to start an engine. Geared engine starting works like the starter in a conventional automobile. A servo actuated gear will couple and decouple the motor to the engine to start it.

Though battery technology still proves to be the main constraint of electrified powertrain, careful design and mission planning can help promote the benefits of electrified powertrain while minimizing the weight penalties incurred. The mission planning code adds to the existing research by eliminating the assumption of a blended climb and comparing the weight penalties of a blended climb versus an engine only climb and selecting the lightest option. The code also takes fuel weight into account and iterates to ensure the components selected to ensure the lowest weight penalty. Though reverse thrust engine starting proved unsuccessful, the success of geared engine starting now allows the engine to be shut off during loiter reducing both acoustic profile and fuel consumption during loiter.

When I was eleven, while riding in the car with my Dad, I asked him what he thought I should be when I grew up. As if he had been anticipating the question, he immediately answered “Mechanical Engineer”. That question seeming easy enough, I followed up by asking where I should go to study mechanical engineering. Again, without hesitation, my Dad answered “NC State”. Suffice to say, that twenty second conversation with my Dad shaped how the following seven years of my life would unfold.

In high school, eager to learn how things are designed and made, I signed up for every drafting and metal shop class offered and was even reprimanded my senior year for bending the enrollment rules to take advanced studies metal shop two years in a row. When not in class I trained with the Asheville High dive team and earned a gold medal at the state championships my Junior year.

I came to NC State in the fall of 2009 as a prospective member of the department of mechanical engineering and a recruited walk-on of the dive team. I spent the next four years diving and studying mechanical engineering. I graduated in the spring of 2009 during the height of the worst recession since before I was born. After a few months of various part-time jobs, I took an internship as a manufacturing engineering at ABB Inc. in Pinetops North Carolina.

My internship at ABB afforded me the opportunity to work under the tutelage of my soon to be mentor and dear friend Don Richerson. Though Don did not have his engineering degree, I admired and respected his laid back and pragmatic approach to solving engineering problems in addition to the forty plus years of experience he had gained since returning from the Vietnam War. I worked with Don on the specialty transformers product line until I was hired full time and was promoted to manufacturing engineer for the specialty transformers line while Don prepared for retirement. In January of 2012, I was moved to manufacturing engineer of the OEM product line which widened my scope of knowledge of plant-wide operations in addition to affording me more opportunities for advancement. However, after the unexpected death of a good friend’s father, my newly deepened appreciation for how short life is lead me to the difficult decision to leave the company to complete my Master’s degree that I had been doing online since my hiring.

With 21 credit hours remaining, I took an ambitious 12-hour course load in the fall of 2012 to put me on par to finish the following semester. Those 12 hours, which included FEA, design optimization, mechanical design assembly, and advanced solid mechanics, backed up what I had learned about the difference between theory and practice while at ABB and reinforced the importance of simplicity and pragmatism. While completing my final nine hours the following semester, another conversation that lasted less than a minute set up how the next several years of my life would unfold. While talking with my friend Jonx, I mentioned that I thought it was cool that he was part of a research team that forwent sleep to design and build a hybrid car. He replied to my comment by suggesting I join the team as they were short staffed and drastically behind schedule. I agreed, not knowing at the time the significance of that forty second conversation. The objective was clear, redesign, build and integrate mounting structure for the vehicle’s energy storage, traction, and range extension systems in addition to a custom trailer hitch, exhaust, and cooling system. With six weeks until competition I got to work. I designed components and ran analyses at night, went to class, studied, did homework, and sometimes slept during the day. At one point, our shop manager Will pulled me aside and said, “Scott, I appreciate how hard you’ve been working; But you have a final Thursday and if I see you in the shop before then, I’m going to punch you in the face!” I graduated with my Master’s in April of 2013, slept for two days, and left with the EcoCAR team for competition. The competition was unreal. Though we didn’t place very high, the look on people’s faces when they saw the amount of quality work we had accomplished in such a short amount of time truly made me proud of the part I played. 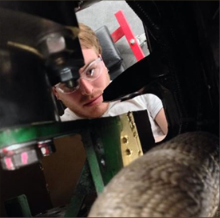