Prediction of aerosol transport and deposition in the human respiratory tract can assist in predicting health effects of inhaled toxic particles or in developing new drug-aerosols. However, the sheer complexity of the human lung, featuring a total of 16 million complex tubular airways, prohibits full-scale computer simulations of the fluid-particle dynamics for the entire respiratory system. Hence, three different modeling approaches have been developed to predict particle transport and deposition during breathing. Starting with the whole-lung airway model I (WLAM I), the actual lung geometry was radically reduced by lumping all airways together into an exponentially expanding one-dimensional conduit which looks like a trumpet. With whole-lung airway model II (WLAM II), an attempt has been made to realistically and accurately represent actual transient airflow as well as inhaled particle dynamics, representing the impact of all respiratory-tract airways, i.e., from nose/mouth to generation 23. Finally, focusing on the O2-CO2 gas exchange region, the alveolar model consists of TBUs with attached spherical alveoli. The expanding and contracting motion of the alveoli during inhalation and exhalation is then accommodated in WLAM I and WLAM II. In WLAM I the respiratory tract geometry is first represented by a 3-D mouth-to-trachea configuration and then all subsequent airways are lumped together into an exponentially expanding 1-D conduit. The diameter for each generation of the 1-D extension was obtained on a subject-specific basis from the calculated total volume which represents each generation of the individual. The alveolar volume was added based on the approximate number of alveoli per generation. A wall-displacement boundary condition was applied at the bottom surface of the first-generation WLAM, so that any breathing pattern due to the negative alveolar pressure can be reproduced. Specifically, different inhalation/exhalation scenarios (rest, exercise, etc.) were implemented by controlling the wall/mesh displacements to simulate realistic breathing cycles in the WLAM I. Good model validation was achieved for total and regional micron-particle depositions. In WLAM II, a more realistic approximation of the human lung was achieved by using geometric data sets for subject-specific human upper airways, typically from nose/mouth to generation three, with triple bifurcation units (TBUs) attached to capture a few additional generations. Specifically, the model geometry consists of subject-specific upper airways in 3-D, which are connected to geometrically and flow-rate adjusted TBUs plus the alveolar model in series and parallel – all based on morphometric measurements of human lung casts. So, the TBUs are used to extend the geometry from the 3-D upper airways to simulate the local airflow and hence capture the influence of the bifurcating geometry (carinal ridge) on particle deposition. In this new whole-lung model, the alveolar movement was applied on the alveoli surface to control any given inhalation and exhalation waveform, and hence physiological lung breathing mechanism was captured. The model accounts for lung airway resistances in series and parallel and thereby effectively models the upstream velocity profiles which depend on downstream airway resistances. The objective of this study was to develop three-dimensional whole lung models which can effectively be used to predict micron- and nano-particle deposition in human lungs during breathing. The airflow and particle transport through the lung airways were successfully simulated and analyzed, using computational fluid-particle dynamics. Total and regional particle depositions were calculated and validated with experimental lung deposition data. These model results provide critical insight into aerosol transport and deposition in lung airways. The results indicate that large amounts of particles are being filtered out by the extra-thoracic and the upper tracheo-bronchial airways. For example, aerosol inhalation devices have typically high airparticle flow rates, thereby wasting large amounts of drugs in the upper respiratory tracts. Hence, in order to achieve drug-aerosol delivery to, say, the alveolar region, slow and deep inhalation is recommended; implying that commercial inhalers have to be modified. Specifically, applying the new methodology for direct drug-delivery in the current modeling approach, targeted delivery can be achieved. Additionally, it has been shown that increased aerosol deposition in specific lung regions can be achieved by changing the aerosol diameter. In summary, the models can be used for: (i) analyzing the toxicological effects of exposure to particulate matter, (ii) estimating pharmacological effects of administered pulmonary drugs, and (iii) providing inhaler-design guidelines for improved drug-aerosol targeting.

Arun Varghese Kolanjiyil was born in Kerala, India. He attended Mahatma Gandhi University, Kerala, India, for his undergraduate studies and earned Bachelor’s degree in Mechanical Engineering. Up on competition of his undergraduate study, he decided to chase his dream of studying in a foreign university and joined North Carolina State University, Raleigh, NC. He completed Master’s in Mechanical Engineering from the Department of Mechanical and Aerospace Engineering in spring 2013. During his Master’s program he had the opportunity to work under the direction of Professor Clement Kleinstreuer in the area of lung fluid-particle dynamics. After receiving his Master’s degree he continued his research while enrolling for a doctoral degree in the same department. 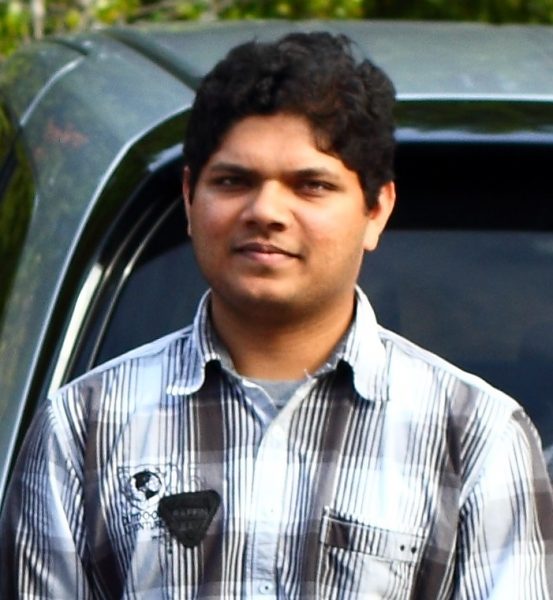