Researchers at North Carolina State University have developed a new technique that allows them to print circuits on flexible, stretchable substrates using silver nanowires. The advance makes it possible to integrate the material into a wide array of electronic devices.

Silver nanowires have drawn significant interest in recent years for use in many applications, ranging from prosthetic devices, due to their flexibility, stretchability and conductive properties. While proof-of-concept experiments have been promising, there have been significant challenges to printing highly integrated circuits using silver nanowires. 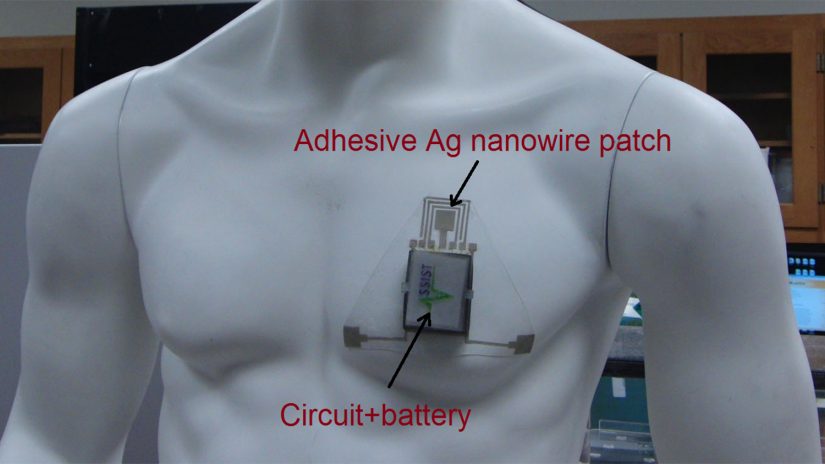 “Our approach uses electrohydrodynamic printing, which relies on electrostatic force to eject the ink from the nozzle and draw it to the appropriate site on the substrate,” says Jingyan Dong, co-corresponding author of a paper on the work and an associate professor in NC State’s Edward P. Fitts Department of Industrial & Systems Engineering. “This approach allows us to use a very wide nozzle – which prevents clogging – while retaining very fine printing resolution.”

“And because our ‘ink’ consists of a solvent containing silver nanowires that are typically more than 20 micrometers long, the resulting circuits have the desired conductivity, flexibility and stretchability,” says Yong Zhu, a professor of mechanical engineering at NC State and co-corresponding author of the paper.

“In addition, the solvent we use is both nontoxic and water-soluble,” says Zheng Cui, a Ph.D. student at NC State and lead author of the paper. “Once the circuit is printed, the solvent can simply be washed off.”

The researchers have used the new technique to create prototypes that make use of the silver nanowire circuits, including a glove with an internal heater and a wearable electrode for use in electrocardiography. NC State has filed a provisional patent on the technique.

“Given the technique’s efficiency, direct writing capability, and scalability, we’re optimistic that this can be used to advance the development of flexible, stretchable electronics using silver nanowires – making these devices practical from a manufacturing perspective,” Zhu says.

The paper, “Electrohydrodynamic Printing of Silver Nanowires for Flexible and Stretchable Electronics,” is published in the journal Nanoscale. The paper was co-authored by Yiwei Han, a Ph.D. student at NC State, and Qijin Huang, a former postdoctoral researcher at NC State.

The work was done with support from the National Science Foundation, under grants CMMI-1728370 and CMMI-1333775.