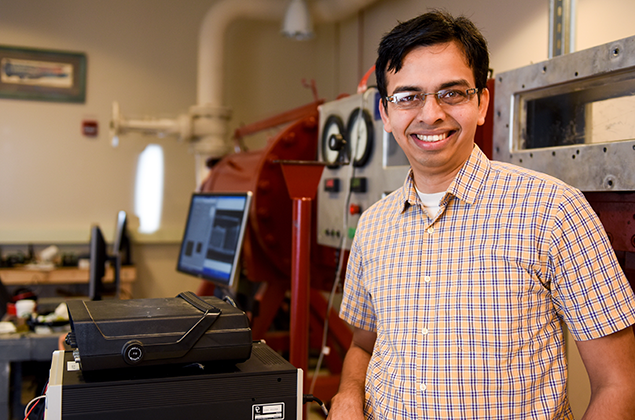 Dr. Venkateswaran Narayanaswamy, assistant professor of mechanical and aerospace engineering at North Carolina State University, has received a Young Investigator Research Program award from the Air Force Office of Scientific Research (AFOSR). The AFOSR will provide $120,000 per year over the course of three to five years to support his project, “Investigation of Shock Boundary Layer Interactions to Unravel the Physics of Unstart in Axisymmetric Inlets.” The goal of this project is to develop autonomous hypersonic platforms, which can have a game-changing impact on high-speed commercial travel, defense technology and commercial space access, and make a profound difference in world trade and commerce. The results of this project will contribute to bringing down the operating speed of the scramjet that would facilitate better vehicle integration and unravel the physics of inlet unstart phenomenon by elucidating the flow interactions that initiate and sustain unstart. The educational component of the project will engage with different organizations within NC State to provide a research experience to undergraduate students, especially from traditionally underserved communities, and collaborate with K-12 outreach activities to bring middle and high school students to campus during the summer to learn about current research. Findings of the research will be disseminated by adding educational modules in the undergraduate and graduate courses Narayanaswamy teaches. Narayanaswamy received a B.S. degree in aerospace engineering from the Indian Institute of Technology Madras (2004) and a Ph.D. in aerospace engineering from the University of Texas (2010). His research is currently funded by AFOSR, the Army Research Office and the National Science Foundation.