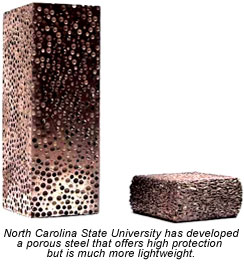 imitations on us to push forward for even larger structures like vehicle armor,” Li said. Afsaneh Rabiei, professor of mechanical and aerospace engineering at North Carolina State University, has developed a porous steel that offers high protection against bullets and blasts, but is much more lightweight. “The material is basically like a bubble wrap, or Styrofoam, but in a metallic version,” she said. Normally, an air bubble in steel would make the metal weaker. But when dispersed in a uniform manner, it becomes stronger. It’s no different than the thin layer of Styrofoam in cartons that manages to protect eggs, or the skull, also made of a porous material, which protects the most vital human organ. “It provides a cushioning ability that can absorb impacts,” she said. “She could not reveal specifics, but the material in tests was able to completely stop “heavy” caliber armor piercing bullets using about one inch thickness.” She is now working on optimization of the armor for protection against both blast and ballistic. She continues to collect more test data against larger threats, and hopes that Army vehicle programs take notice. More recently, she has received funding from the Defense Department’s joint aircraft survivability program. TARDEC’s Filar said there are other ongoing projects to make vehicle armor more effective. Additive manufacturing, better known as 3D printing, is being looked at, but it is still in the basic research phase. “Additive manufacturing has the potential to reduce the cost of armor systems that require complex geometries or require substantial machining/processing,” he said. But the materials used in this method simply aren’t strong enough. Both the Departments of Defense and Energy are sponsoring the basic research looking into stronger 3D printing materials, he said. There is also work on armor that can adapt and react to its environment. “The concept is to use as much information as possible about the surrounding environment — threat likelihood, temperature, humidity, terrain, etc. — to optimize the armor response in a way that increases its performance in a given engagement,” he said. He declined to give further details as much of that work is classified.