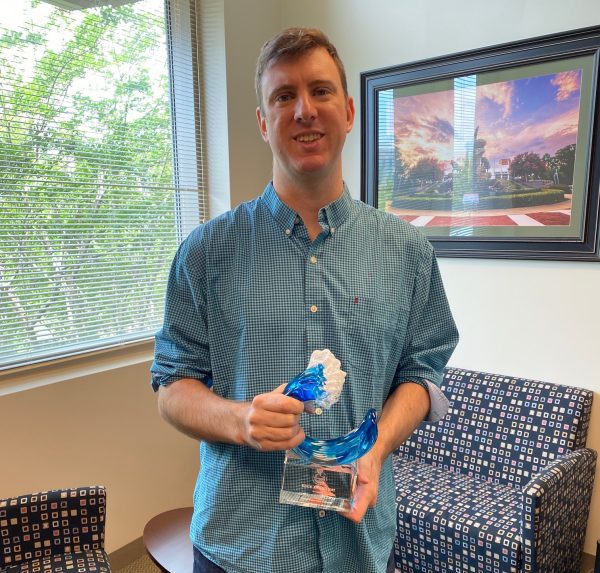 Earlier this summer, MAE Associate Professor Chris Vermillion received the North Carolina Renewable Ocean Program’s (NCROEP’s) Edge Award. Named after famed NC State marine engineering professor and pioneer of the NCROEP Billy Edge, this award is given annually to one member of the program who demonstrates exemplary research in the area of marine renewable energy.

Chris Vermillion has been a member of the program since 2016, focusing on the development of tethered systems and arrays thereof for harvesting ocean current resources in areas with deep seabeds and/or limited flow resources. His signature accomplishments involve the dynamic characterization, optimal control, and experimental validation of underwater energy-harvesting kite systems, which utilize high-speed periodic motion to harvest transformatively more power per unit mass than stationary devices.

This work has progressed to large-scale DoE and DARPA projects for which Vermillion’s team (including Matt Bryant, Kenneth Granlund, and Andre Mazzoleni of the MAE Department, and Mike Muglia of the NC Coastal Studies Institute) has recently completed successful open-water tow test validation of a scaled prototype.

In receiving this award, Vermillion noted the importance of the NCROEP in facilitating the multi-disciplinary partnerships necessary to pull off successful experimental prototyping.

As Vermillion puts it, “The benefit of the NCROEP goes far beyond the seed funding that it provides; in particular, it connects researchers who would otherwise never get together in order to accomplish projects that would have never gotten done in isolation.”

Further information regarding the energy-harvesting kite technology and corresponding control approaches being developed by Vermillion’s group can be found at https://www.mae.ncsu.edu/corelab/59-2/