In late April, the team traveled to Huntsville, Alabama to compete against 43 other teams in the USLI College and University Division of NASA’s annual Student Launch competition. Also competing were 16 teams that participated in the SLI Middle, High School and Informal Education Institution Division of the competition.

Each year, the team designs and builds a new rocket to take to Student Launch.The team has won a number of awards since their first rocket, “Red Means Go,” in 2010. This year, the team’s rocket was given the name “Catastrophe,” which was successfully recovered after reaching an apogee of 3363 feet at the competition. 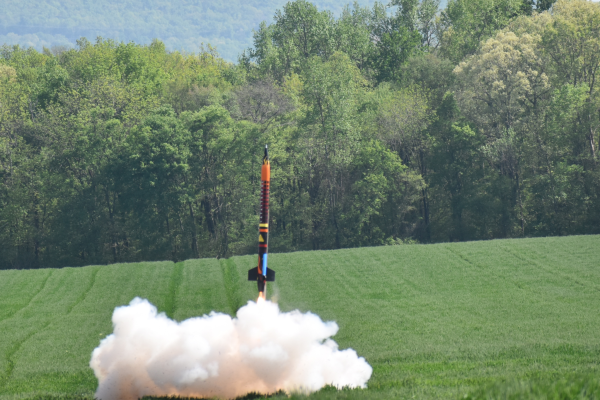 On account of its stunning design, Catastrophe won first place in the Best-Looking Rocket Category for the collegiate division, an award that is given after each team’s rocket is judged by their peers.

Catastrophe and the team also raked in several more awards during the ceremony, including first place in the Social Media Category, a prize that is presented to the student team that had the most active and creative social media presence throughout the project year. The team’s social media officer is Ashwin Sivayogan, a rising senior in MAE’s Aerospace Engineering Program, who ensures the team’s social media accounts keep friends, family, staff, faculty and industry professionals in the loop on the team’s progress while keeping their posts fun and entertaining.

Keeping with the fiery nature of both Catastrophe and the team’s free spirits, they also won second place in the Team Spirit Award, which is another award judged by peers and given to the team with the best team spirit.

Finally, the team also won second place in the AIAA Launch Division Payload Design Award, which is presented to the team with the most creative and innovative payload design while maximizing safety and science value.

Congratulations to all of the hardworking student’s that contributed to this year’s rocket, and to the Student Launch competition!