Each year, seniors from the Department of Mechanical and Aerospace Engineering participate in their respective Senior Design Courses, in which students design, manufacture and build a variety of senior design projects.

This year in Mechanical Engineering Senior Design, there were 42 teams comprised of 217 total students.

total students. The students presented and demonstrated their projects across three senior design days, during which each team would pine for the favor of the judges and industry sponsors that would select the winning teams for each project.

On the first day, the Pack Motorsports teams Formula SAE and Baja SAE, competed against four teams that were tasked with designing heliocopters for the Helio-E research group of North Carolina State University under Dr. Larry Silverberg. The Formula Team, which builds a new formula racing car each year, designed an improved steering and braking system that will decrease the braking and steering effort required from the driver. The Baja Team, on the other hand, was tasked with building a test apparatus that safely secures a T-shaped weld sample for the duration of a destructive weld test. Each of these projects is sponsored by MAE and each team’s advisors, and the winning  team of this section was Team Helios, which (as their name implies) completed the heliocopter project.

Also on the first day, six teams presented their Zurn Sponsored industry project, which tasked them with developing a faucet with a nonmetallic waterway. The winning team for this section was once again was the unnamed Team #4.

Six teams demonstrated their Hybrid UV Filter systems, sponsored by Pentair. This project tasked students with designing a hybrid pool filter that integrates mechanical filtration and UV light sanitation. The winning team for this section was the unnamed Team #4.

Six teams demonstrated the Bob Barker Sponsored project to design a system that is safe, PREA-compliant and offers privacy to users of shower stalls in correctional facilities, for BobBarker co. The privacy system should be novel, sanitary and effective, with minimal risks to the user. The unnamed Team #2 won first prize in this section.

The remaining six teams on day two demonstrated their Caterpillar Sponsored project to design an improved progressive thumb linkage for Caterpillar mini hydraulic excavators by reducing the Rackback angle to improve clearance while maintaining clamping force and covering a full range of motion with the bucket. The winning team in this section was team CaterPack.

On the third and final day of the Mechanical Engineering presentations, six teams demonstrated their designs for the John Deere Sponsored industry project to design a folding mechanism for a rollover protective structure (ROPS) of a lawn mower that improves user experience compared to existing designs. Taking home first prize for the ROPS project was Team ROPStars.

Finally, the remaining six teams presented their International Inventory Management Sponsored projects to provide a design solution that would increase the mean time between failures (MTBF) of the IIM Globoidal Indexing Cam gearbox. This solution should allow the machine to maintain positional accuracy for at least two years of standard industry use. The winning team in this section was team Weight Watchers.

This year in Aerospace Engineering Senior Design, there were 11 teams comprised of 70 total students. Three teams were tasked with building a Lunar Rover to support NASA’s ARTEMIS Program. Three teams built fixed-wing aircrafts and three teams built multi-copter aircrafts, both of which were tasked with Develop a simple, modular aircraft capable of at least two unique tasks to support the US Forest Service.

One team from each of these three sections was selected by judges as the winners of their respective sections during the annual Aerospace Engineering Senior Design Symposium on Friday, April 15. To win over the judges and show the capabilities of their designs, teams conducted 15 minute presentations in the morning and poster sessions in the afternoon – during which friends, family, colleagues and mentors came out in droves to see the seniors’ hard work in action.

In the rover section, Team LAIKA was declared with winner; in the fixed wing section, team WolfWings was the winner; and last but certainly not least, Team Guardian Props was declared the winner of the multi-copter section. 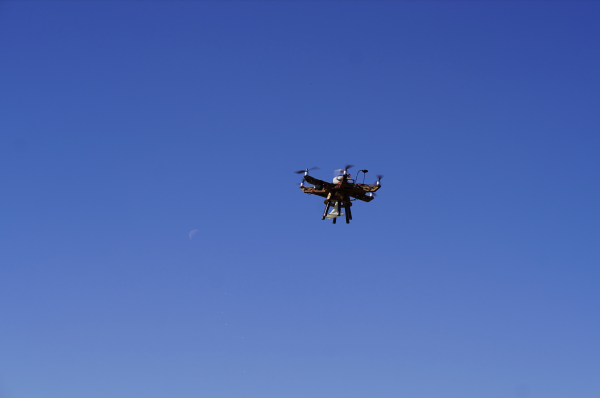 Another team was comprised of NC State’s AIAA Design Build Fly (DBF) Team, whose job was to develop a fixed-wing UAV that provides humanitarian aid via syringe and vaccine vial payload capable of being remotely deployed on the ground. The DBF competition required that the vehicle fit into an eight foot by eight foot square, a parameter that the team pushed to the limits by constructing the massive Millenium Wolf so as to maximize the size of the payload the aircraft was able to carry.

Millenium Wolf, which won 6th best proposal for the 2022 AIAA DBF Competition, had two successful flights. After the first, the team (comprised of seven senior design students and 11 undergraduates) made adjustments to optimize the design for the competition. During the second flight, Millenium Wolf flew successfully and completed the task at hand, but suffered a catastrophic crash that will prevent the team from competing in this year’s competition.

Lastly, one final team was comprised of the NC State High-Powered Rocketry Team, also known as “Tacho-Lycos,” which each year constructs a rocket to compete in NASA’s Student Launch Competition. This year, the team (which includes seven senior design students) constructed the towering “Catastrophe” Rocket, which will be taken to the compete against other teams from across the country in Huntsville, Alabama on April 22 and 23.

Additionally, Aerospace Engineering Senior Design Instructor Dr. Felix Ewere presented three Awards for Outstanding Project Managers, which was awarded to three teams leads that went above and beyond in the development of their projects. This year’s winners were Joshua Rusmisel of the DBF Team, Sean Aiton of the Rocketry Team, and Greyson Brown of multi-copter Team LUVTREES.

All around, every 2022 senior design student gave their all and each team designed their very own spectacular feats of engineering. Throughout senior design week, the students rejoiced with friends, loved ones, mentors and colleagues as they put their hard work on display. Congratulations to all of the amazing senior design students who participated in this year’s courses. We couldn’t be more proud of you all!